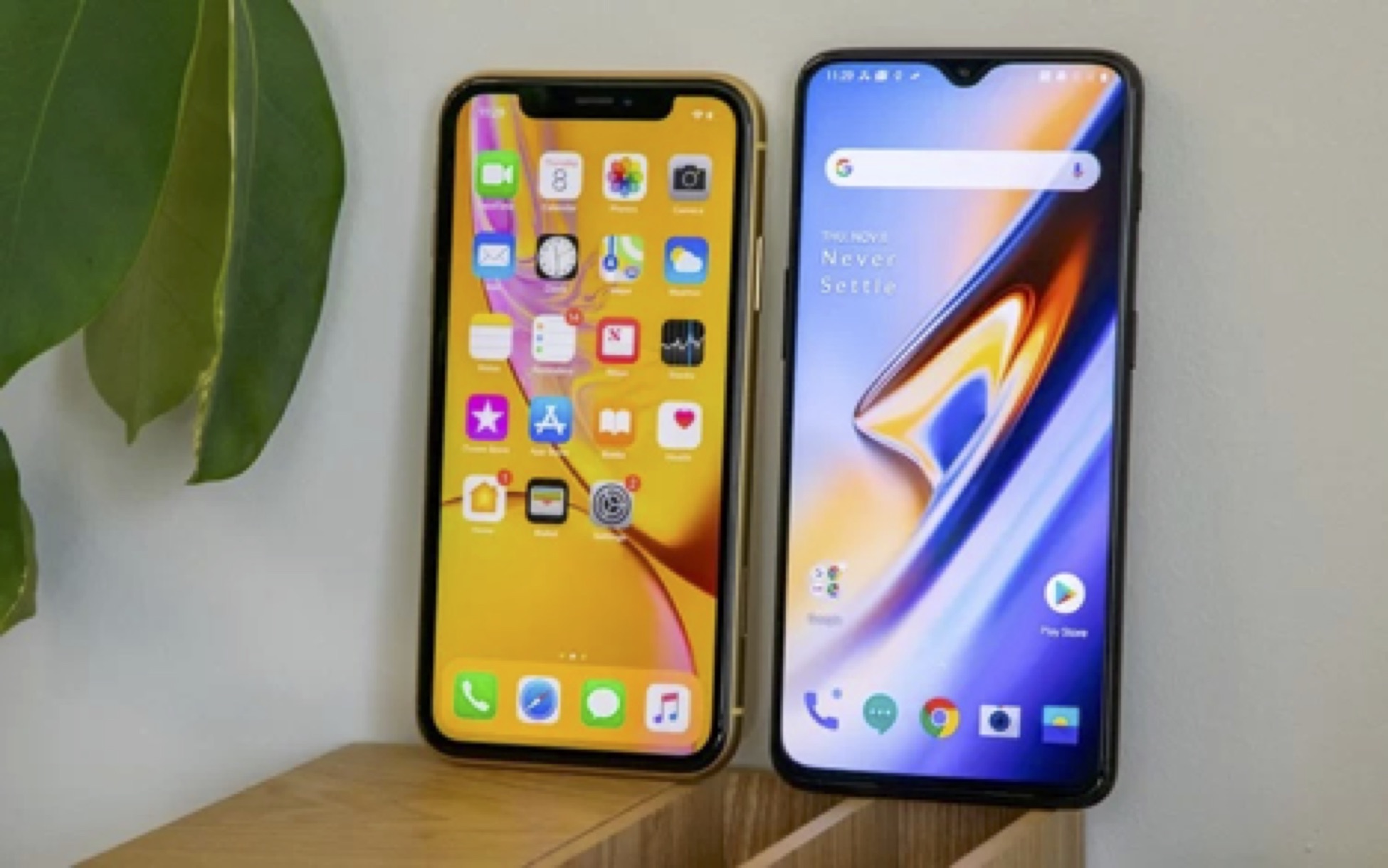 2018 has been an exciting year for the smartphone industry. In fact, the third and last quarter of this year saw the release of some of the most advanced premium mobile devices in the world.

Just recently, I was fortunate enough to get my hands on the highly coveted phones iPhone XR and Google Pixel 3 XL. Both models are bezel-less but sport “notches” at the top portion of their screens to make way for the front-facing cameras. While Apple and Google both proudly claimed that their devices carry an “all-screen” design, the notches are clear evidence that they’re not. Nevertheless, both phones are gorgeous with their sleek designs.

Unfortunately, both devices have been widely criticized by their respective patrons for some issues. Most iPhone fanatics found iPhone XR lacking in new features. Well, what do we really expect from a product that’s a mere upgrade from Apples anniversary phone iPhone X?

On the other hand, the Google Pixel 3 XL has reportedly encountered a wave of bugs and other problems which really disappointed some of its early users. To date, people are still waiting for Google to release fixes to these issues.

Luckily, the Android market offers a bunch of options that the iPhone market doesn’t have. In fact, if you believe that the Google Pixel 3 or 3 XL are the best Android phones in the market today, you are dead wrong. If you are to ask me, the title “Best Android Smartphone of 2018” should go to the newly launched OnePlus 6T Thunder Purple I just had a chance to test recently.

Let’s have a quick breakdown of OnePlus 6T’s amazing features to know what sets it apart from both Apple and Google’s premium smartphones.

Since its release last November, many people have considered 6T a sweet escape from the pricey and disappointing flagship smartphones launched by Apple and Google. The OnePlus 6T is faster and more reliable as compared to other Android phones of the same specifications in the market today.

Equipped with the latest Qualcomm Snapdragon 845 chip and 8gb RAM, it can compete even with allegedly the best smartphones in Singapore at the moment. It also features up to 256gb of internal storage which is a great treat to those people who love games, Android applications, and taking features or videos. 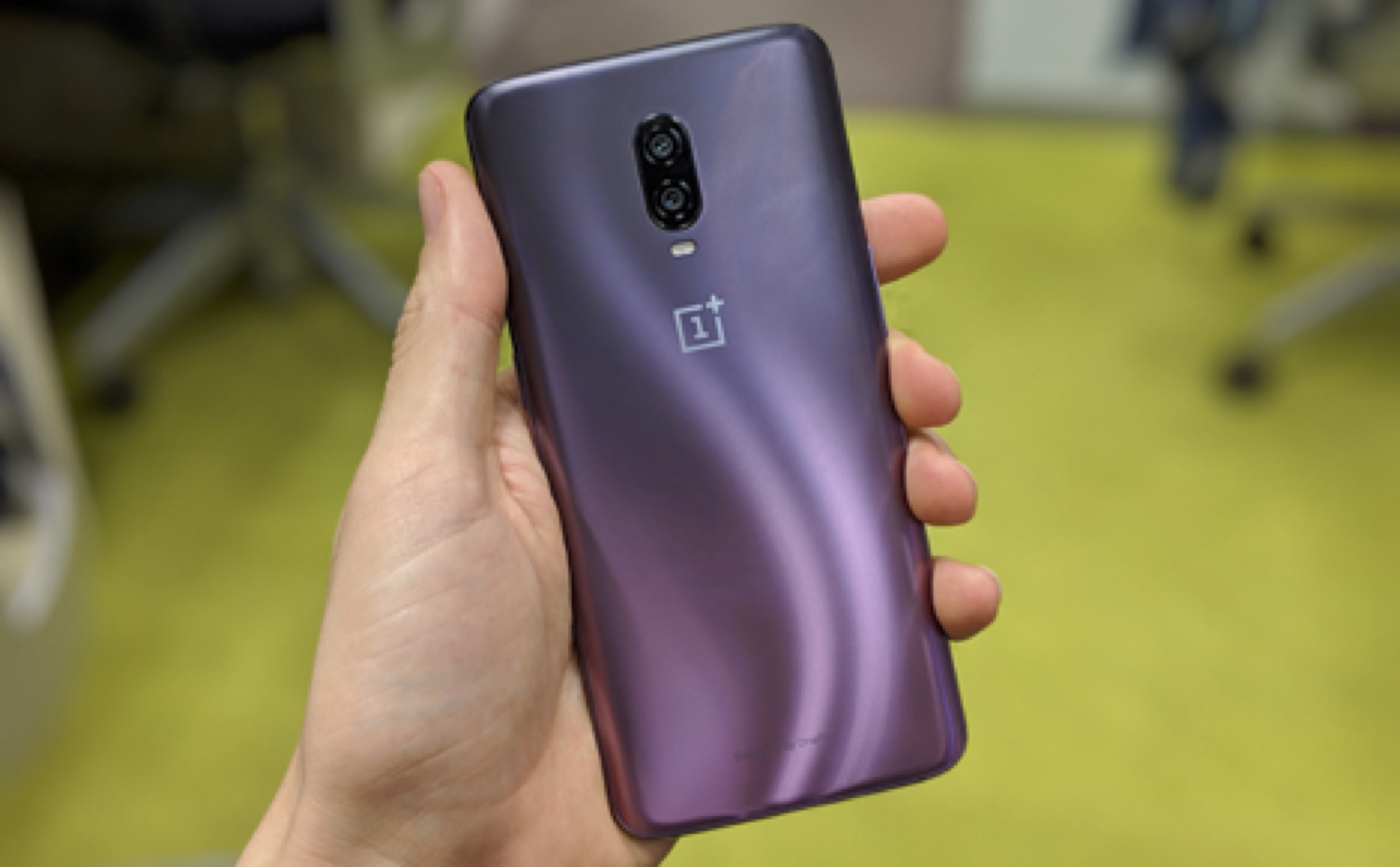 Aside from its impressive performance, the OnePlus 6T is a refreshing sight with its classy design and gradient color. It comes in three colors, Mirror Black, Midnight Black, and my favorite – Thunder Purple!

The OnePlus 6T Thunder Purple is truly stunning with its black/purple gradient and noticeable curving S that shifts with light. It will surely remind anyone of a lightning strike that runs down the back of this sophisticated phone.

Well, it comes as a no surprise at all since OnePlus revealed that the view of a thunderstorm during sunset had inspired the Thunder Purple.

Behind the mobile device lies the vertical camera together with its flash just above the OnePlus logo. On the right side, you’ll find the power button and a switch for the phone’s ringer. If this arrangement looks familiar to you, well it’s probably because you’ve seen the same with Apple iPhones.

The switch has three positions — the top for the ring, a center for vibrate, and the bottom for silent mode. This makes it easier for any user to switch between the three options when needed. The volume is located on the left side of the device while the USB type-C port for charging and the speakers are found at the bottom.

Overall, the OnePlus 6T Thunder Purple has a truly unique and sophisticated design that you’ll never find in any Android smartphones in the market today. 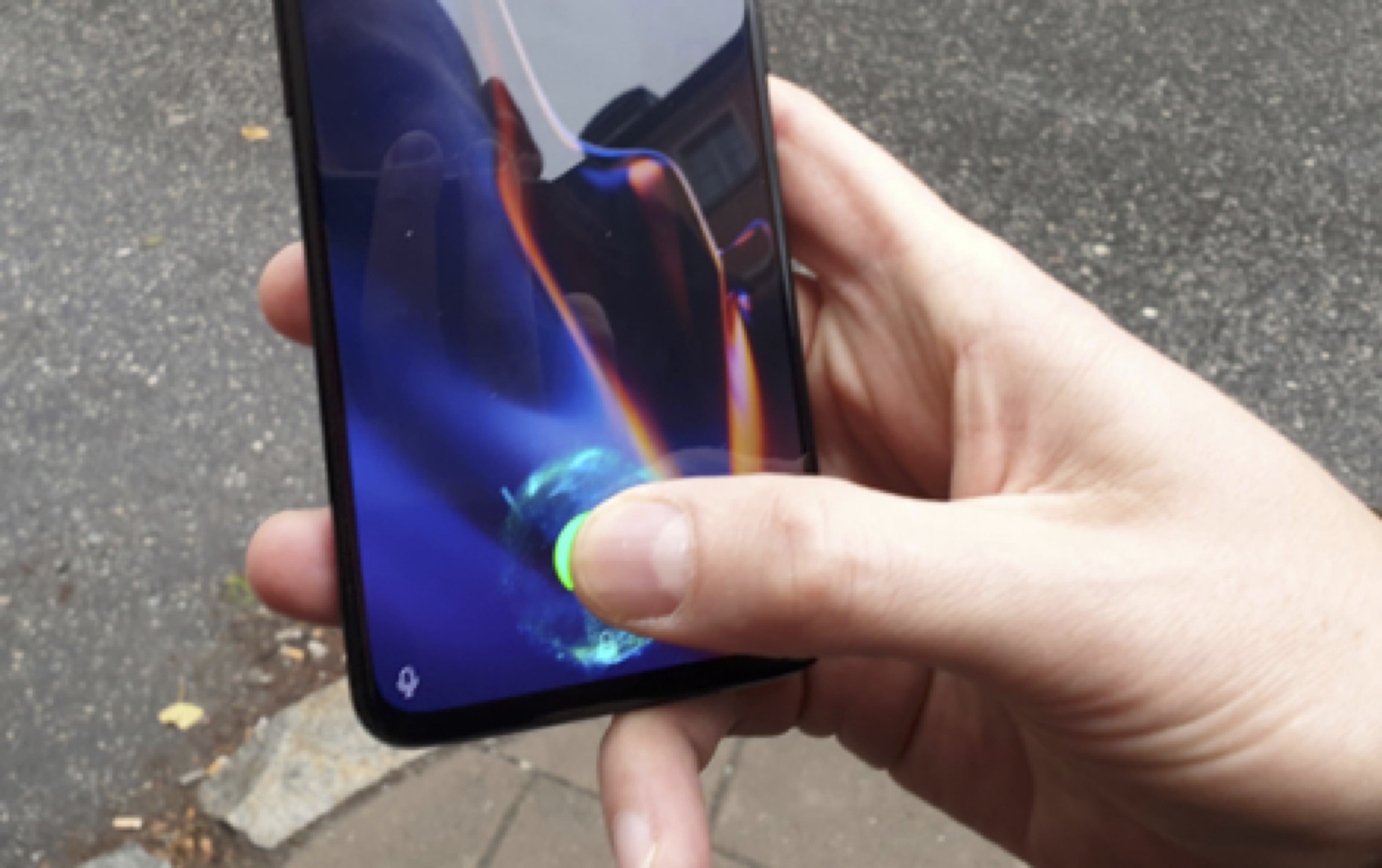 The OnePlus 6T Thunder Purple and its siblings come with an optical in-display fingerprint sensor, making it far superior in that area over the iPhone XR and Google Pixel 3 XL. This technology has been in the making for many years now especially with manufacturers like Apple, Google, and Samsung going bezel-less. It’s a real surprise that OnePlus appears to be way ahead of these big names in the smartphone industry.

One Plus 6T’s optical in-display fingerprint scanner is by far the fastest I ever tried. It’s even quicker and more accurate than Huawei’s Mate 20 Pro which features the same technology. Do note that Huawei is widely known for its advanced fingerprint sensor technology. 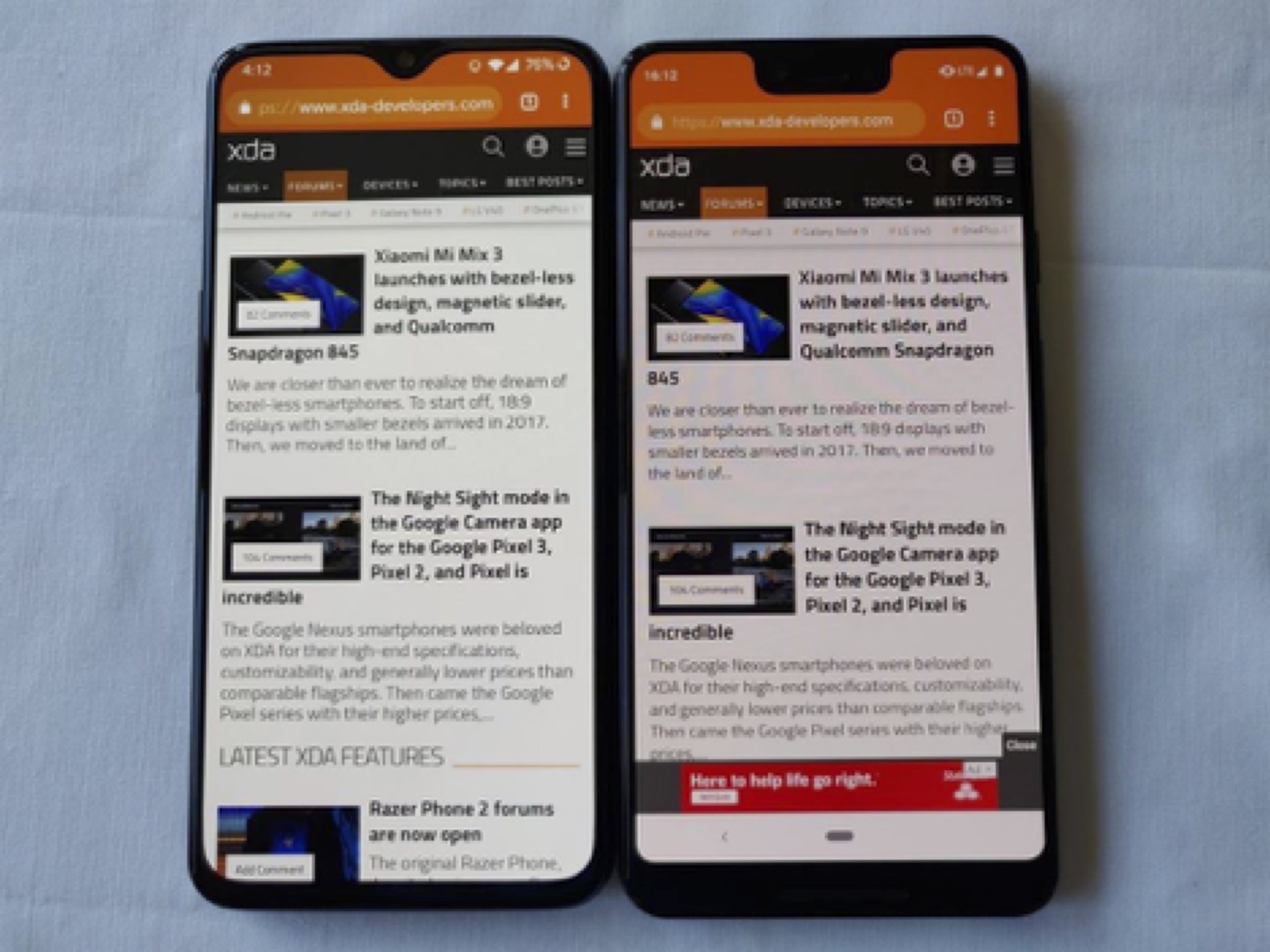 The OnePlus 6T Thunder Purple has a remarkable 6.41-inch AMOLED display with an aspect ratio of 19.5:9. It’s not totally bezel-less like almost all smartphones today, and it also sports a decent size V or teardrop-shaped notch at the top of its display for the front-facing camera.

Most premium phones like the iPhone XR and Google Pixel 3 XL have wider notches to accommodate their selfie sensors and provide high-quality photos to their users. Well, OnePlus was able to achieve the same level of image quality without the need for a big notch that affects the aesthetic design of its 6T smartphone — another point for the company.

The 6T’s display is also better than the other smartphones given its price. Because it’s AMOLED, the screen shuts down all pixels, resulting in a pure black that allows colors to be rendered on top it. This gives the displayed images more vibrant or saturated colors. 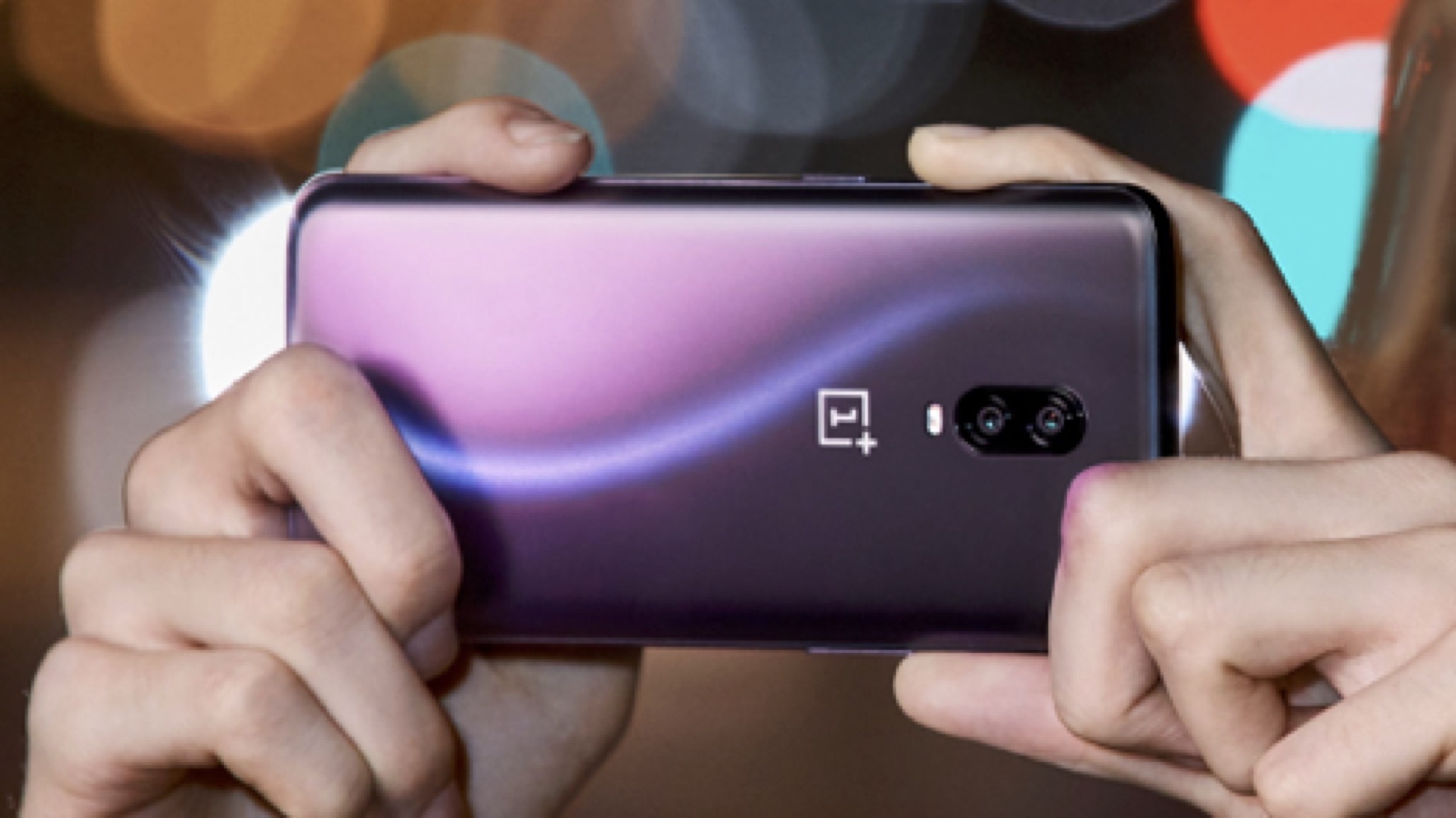 While the OnePlus 6T’s cameras look pretty much the same as its predecessor, the OnePlus 6, there’s more to it than meets the eye. Yes, there are still two rear cameras: the primary 16MP camera and the secondary 20MP camera.

However, what sets the OnePlus 6T’s camera apart from its precursor is the improved algorithm. The company said that the AI camera they equipped the phone with is professionally tuned, ensuring that the phone will provide exceptional image captures of our favorite things to shoot like food, sceneries, and the people around us.

The phone’s camera is also noticeably better when used at night. There is no doubt that OnePlus 6T is one of the best camera phones of 2018.

Overall, the OnePlus 6T is a totally awesome device. Its stunning design and remarkable features will put to shame all other Android and Apple smartphones in the market today. The product shows all the things that OnePlus has learned in its years in the industry.

Aside from that, the OnePlus 6T price in Singapore is only $860. That’s a few hundred bucks cheaper than the iPhone XR and Google Pixel 3 XL which cost over $1000 each. Just imagine, buying a OnePlus 6T will allow you to experience better smartphone features at a much affordable price.