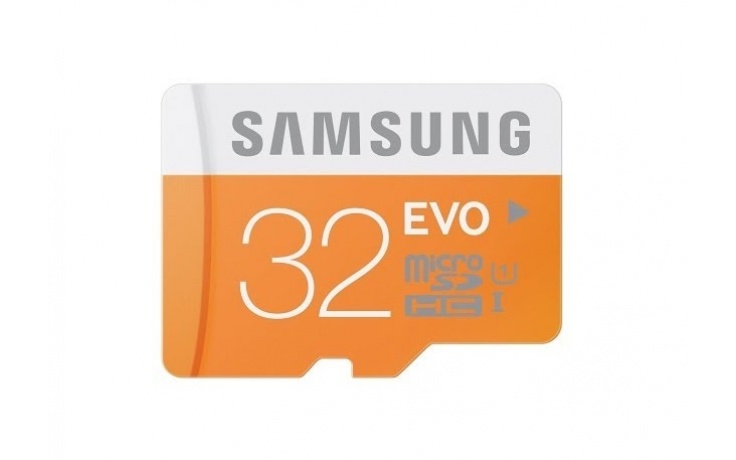 Save your precious memories—fast. This Ultra High Speed memory card is UHS-1 enabled, which means it captures photos and video two times faster than your typical microSD.

The new Samsung EVO microSD line is designed for the more mainstream demographic of consumers, specifically for those looking for reliable performance with their high-end smart phones, tablets, and cameras. The EVO Series microSD cards come in three different capacities, 16GB, 32GB, and 64GB each sporting a sleek white and orange design. These tiny flash cards are also water, shock, magnet, X-ray and temperature proof.

As far as performance goes, the Samsung EVO microSDs are quoted to deliver 48MB/s reads (with no indication of write activity) supporting a UHS Speed Class 1 and Class 10 video recording ratings. When we put it through our tests, it measured just below those figures with a sequential read and write of 44.1MB/s and 19.1MB/s respectively, while random activity boasted 43.9MB/read and 32.0MB/s write. The large-block random write speed we recorded was particularly surprising, and easily the best we have seen for its class.

The Samsung EVO line also offers a very competitive price point for their microSD cards, which go for a street price of approximately $12, $19, and $38 for the 16GB, 32GB, and 64GB capacities respectively. In comparison to cards of similar class, this is essentially the lowest priced card from a well-known brand name all the while offering superior performance. It’s safe to say that all of Samsung’s newly released flash cards are posed to make a serious impact on the market.